I do NOT like the idea of new year’s resolutions, at least for me. Mostly because of the pressure to keep them and to not screw up! However, I do have some things in my life that need some attention. Some are smaller (reading more and better books) and some are, to quote the Cheeto-dusted PEOTUS, YUGE (ending my infernal addiction to sugar!). I’m going to start with this one, though…

PLAY OUTSIDE MORE. (Could also be called “Stop being such a serious and rigid Birch with a capital B in regards to running but also in various life areas.” I just thought PLAY OUTSIDE MORE was much catchier.)

I need to preface this with the fact that I do a fair bit of physical activity, and by physical activity, I mean I run. I run slow, fast(er), long, intervals, hills, trails, road, tempo, fartlek (real word!), basically any form of running, I’m there. I’m not saying I’m OBSESSED with running, but I realized that I HAVE come to the point where I don’t count anything else besides running as legit exercise, I do NOT deviate from the planned run route/length of the day, and I am way too crushed when I don’t reach my time/distance goals. It’s getting pretty serious out there, folks. I need to build in some levity!

Robert and I decided to cross-country ski at Victoria park in the not-freezing-off-my-arse weather. I have my own set of skis and boots, but Robert has tried skiing maybe twice in his 41 years. Fun times resulted, leaving me feeling like quite the expert in comparison (which I really REALLY am not, so let me revel in that feeling for a bit).

You can do it, Robert!

The Victoria track is short and sweet – about 3 k. It was a great intro for Robert and for me and my unused cross country ski muscles.

P.S. I’m posing by this sign because I am DYING to go to the Nordic Brunches and Victoria suppers offered by Culina at the Dogwood Cafe. As a matter of fact, I just decided right now that next weekend, we are going to ski and then go for brunch!

Here’s our couple bonding photo. Note Robert being a trooper in his lined jeans. 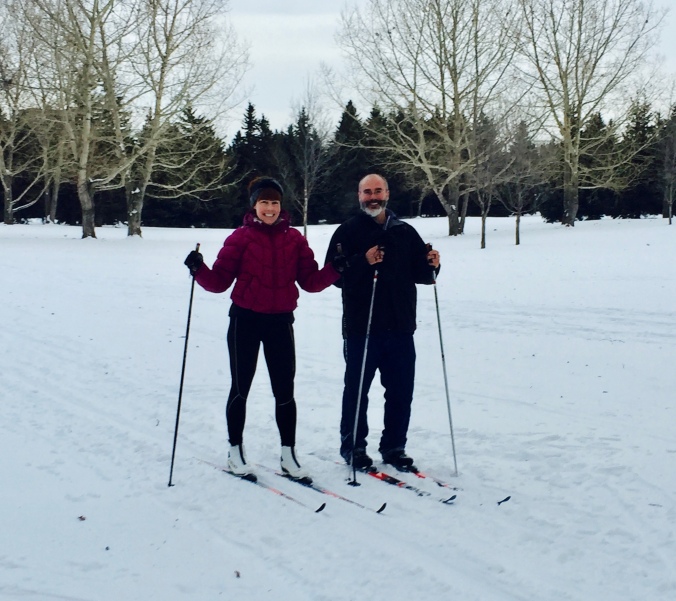 After skiing, we went home to walk the dogs. Couldn’t be anything more fun and more appropriate to my PLAY OUTSIDE MORE goal than frolicking with our pups!

The ONLY way I got this shot was to have Robert hold a stick over my head. Our sweet and completely CRAZY 2 year old Border Collie/Husky mix, Freyja, gets fixated on chewies of any kind and never, ever slows down long enough for me to get a photo.

Here’s my prince, my best buddy in the world, 10 1/2 year old Kona. He’s a Tahltan bear dog cross, which makes him very exotic, don’t you know. He will always sit for a pic but will NEVER look at the camera. Such a funny boy.

And here’s the closest we could get to a double dog photo. Kona steadily refusing to look at the camera and Freyja about to spaz out, tear that stick to shreds, and become a blur.

It was so refreshing, literally and figuratively, to get outside and just have fun without thinking about distances and times. Tomorrow, the dog park and some backyard ravine exploring. I’m determined to continue with my goal!

Still havent found what youre looking for

A Personal Blog of Random Awesomeness

Seen and Heard in Edmonton